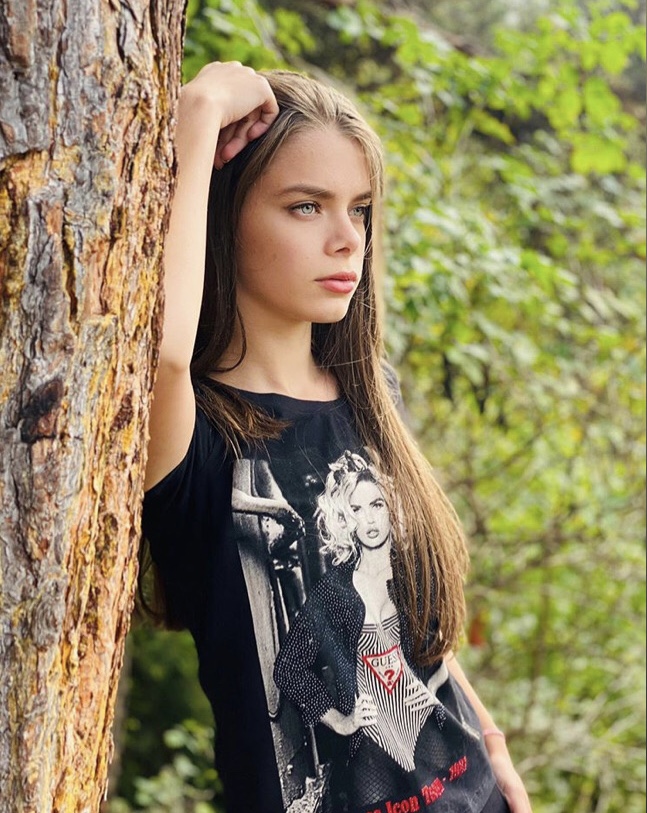 Daria Stefan was born on May 1st 2004, She grew up in a family that loves music which immediately became her passion in life..

At the age of 6 she started singing in the “Miracle Group” of the Sector 6 Children’s Club, then at the Nostalgia Choir, it as where she discovered the world of television and fell in love with this beautiful art – music.

It was in this time period where she focussed on training and discovering her potentials which helped her understand the phenomenon, to adapt and to improve and where she became involved with television.

In 2014 Daria begins her solo career, at which point she began vocal sessions with one of the most recognized and certified Romanian composers who made a significant impact with Daria and her musical journey, his name was Mr. Marius Teicu, composer of over 500 songs and whom has made a decisive mark on his training with music.

In the spring of 2015, she participates in the NEXT STAR Show
Antena 1, where she delighted the audience with the winning song of Eurovision 2014 “Rise Like A Phoenix”.

Following her musical performance in 2015, Daria was selected to participate in 2016 in the Next Star Show-Antena 1, with the song :”Say You Love Me” from the international repertoire, being the only Next Star participant in two consecutive editions.

In the summer of 2015, Daria was rewarded with the Excellence Award from the Romanian Community Center in Canada.

The most important achievement of 2015 was winning the DRY KIDS contest (Disney Channel America) being declared the only Dry Kid child in Romania on this occasion holding a live interview with the Executive Director of Disney Channel with Mrs. Irene Dreyer.

Another important musical achievement since 2015 is the successful participation in various international charts such as:

In 2016 Daria started a musical collaboration with several artists from around the world, the first song in this series of collaborations being with an artist from Germany “Sina Doering” with the song “Merry Go Round”.

In 2016 Daria began working on her own pieces, trying to discover her own style.

Her first song “Wings in Two” released in 2016 is a piece of state, full of emotion, a song about the special people in the life of each of us, those who change, shape and transform us, without whom we could not become more good and we could not progress.

“Chain the World” soon followed which is a song with a social message, a pacifist message, an exhortation to love and understanding in a world so crushed by many wars and conflicts.

In May 2017, Daria was invited to perform two shows in the USA, one for a gymnastics academy “Ziggy’s Academy”, a show that aimed to support the performance of young people regardless of the chosen field, and a show for US Army veterans on Mother’s Day. On this occasion, he had the chance to sing the US national anthem “Star Spangled Banner” for US Army veterans, (to be in their midst, to share emotional moments with them and to make friends with these special people).

In the summer of 2017 was a real success … a new original song “Here 2 Stay” in collaboration with “Red Clover”, a catchy summer song and also the opportunity to promote their original songs on popular TV shows ( Neatza with Razvan and Dani, Friends from 11, Antena Stars Morning, etc.).

In 2018, Daria success in the music business began to thrive, it was the moment when Daria manages to release no less than 3 songs, all in collaboration with composers from the USA and Israel.

The first song “Guilty Pleasure” c Daria Stefan – Guilty Pleasure
composed by Mello D. Lane & Ben Bishop is an exciting, summer song that has been present in several radio and TV shows around the world.

In the fall of 2018, in collaboration with Hook and Rhyme Records – UK, she releases the song “Everybody’s Somebody’s Angel” by  Daria Stefan  composed by the famous American composer Jud Friedman, multi-nominated for an Oscar, Grammy and Golden Globe, known especially for his soundtrack. of the movie “The Bodyguard”, as well as for the song “Run to You” performed masterfully by Whitney Houston.

In 2019 she takes the decisive step towards the world of music, starting the courses at the Dinu Lipatti National College of Art in Bucharest, Jazz – Light Music Section.

Here she discovers a new passion for Jazz, on which occasion she supports several shows.

“Love Me Crazy” was selected for the final of the London Music Video Festival which will take place in London in the summer of 2020.

Currently, Daria is working on writing new originals, in which she tries to make her personal mark and discover her own musical style.

The amazing cover of ‘Purple Rain’ by special Daria Stefan