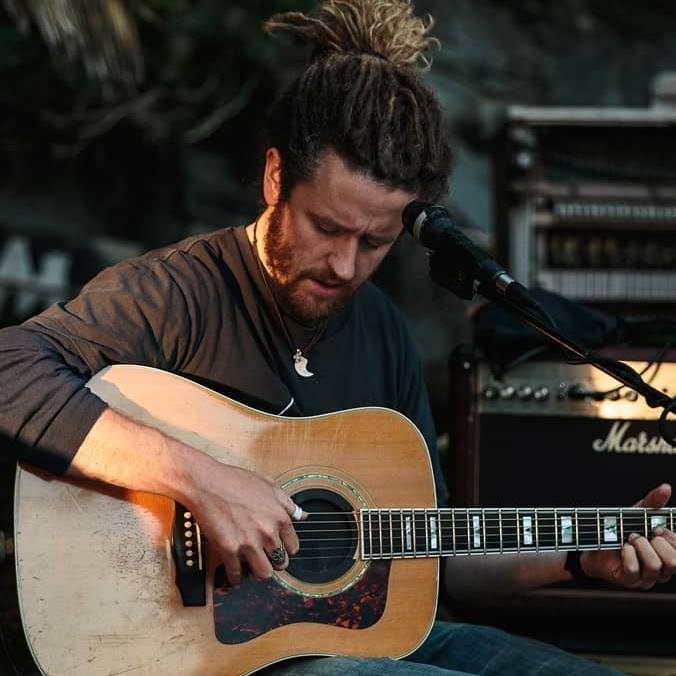 This song is about returning home with fresh eyes after being away for a while and remembering exactly why i call this place home.

This song is for Bude, the people as much as the place itself.

Also for anyone who is lucky enough to truly be in love with where they live.

The opening shot is some drone footage of the view from Crooklets.

Recorded live at Bierkeller, Exeter early in 2018 by Mike Ponting at Inspire Studio.

The journey to becoming the Folk and Blues musician he is today started when James first picked up a guitar at age 5.

One of his first musical inspirations was watching the Talking Heads Stop Making Sense concert on a VHS recorded off the TV.

Seeing Davis Byrne’s dedication to performing really struck a chord with James, building his belief that the ‘show’ is more important than the ‘single’.

This album was his first realisation of the power of lyrics and the emotion they carry within them.

These artists gave him a strong grounding in music which had folk and blues traditions buried right in their core.

Taking note from John Martyn, John Butler and Kelly Joe Phelps, James has obsessively crafted his fingerstyle technique on guitar over the years.

A combination of singer, songwriter, guitarist and storyteller, James has strong Folk roots.

His Folk influences are musicians from both sides of the Atlantic including Ralph McTell, Bert Jansch, Tom Paxton and Pete Seeger. Moving to Exeter, James played regularly at Philip Henry’s jam night and Topsham Folk Club.

One blurry night at Mama Stones even saw him play a few songs alongside Joss Stone.

James’s Bromeliad Acoustic Sessions EP was released in 2017 and he has continued to tell the stories behind these songs at hundreds of gigs around the South West.

Developing his style to include his love of slide guitar and Blues, James played at international venues such as, The Byron Bay Brewery (Aus), The Blue Door (NZ) and Deus Ex Machina (Bali).

From researching the roots of some mainstream icons, James found the Delta Blues artists of the early 20th century like Son House, Robert Johnson and Muddy Waters and the rhythm and blues artists like Chuck Berry, Little Richard and Jackie Wilson.

Returning from travelling to live in Cornwall, James joined the South West Blues scene, jamming with artists such as Vince Lee and Shakin’ Jake Landers.

He creates a full band sound with lingering lyrics.

James was recently asked to join the great Blues musician Seasick Steve on his European Tour as his support act.

The tour will have James opening for Steve at all 10 venues across Europe including Paradiso (Amsterdam), Metropol (Berlin) and The Roundhouse (London).

The tour comes at the same time as the release of James’ latest album, Trespassing Light.

This album tells 12 stories through a blend of Folk and Blues that have been crafted over the last two years.